Applications of Mathematical Programming in the Refining Sector

In this blog, we will understand the fundamental theory of mathematical programming, which is quite imperative in the refining industry to resolve and formulate problems related to optimization.

The prime reason for this lesson is to get insight into “Mathematical Programming,” which is usually denoted by MP. This terminology is quite prevalent, and you may have heard about it in your occupation or at your workplace; therefore, we will talk about it and explain its characteristics. Firstly, we will start with the implementation of mathematical programming in the“Oil & Gas Sector,” particularly in a supply chain process flow, which would be followed by its specific uses in the refining sector. Moreover, you will be given some examples of applying mathematical programming, which may be non-linear/linear, in fuel blending, scheduling, crude oil planning, and optimizing. This subject of mathematical programming is very broad to cover here completely; hence, my objective is to briefly tell you about the topic and give its overview to you, so that you can understand the fundamentals of it. 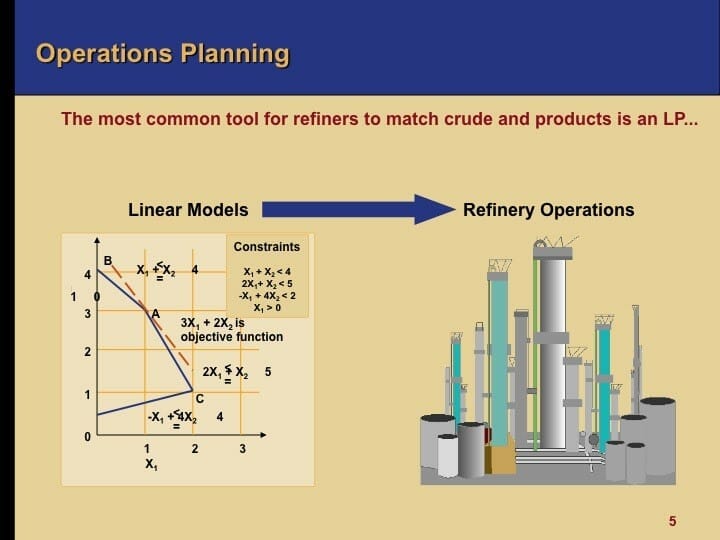 Mathematical Programming with the acronym MP is a terminology to enhance a physical model by opting for the finest end result under given boundary conditions. The first step starts with understanding a problem that one is facing in any sector, such as finance, oil & gas, or any other engineering sector. You understand the problem that you are willing to resolve, which is then followed by formulating a mathematical model of the same problem.

Once the model formulation is carried out, we use MP methods to come up with the finest of all solutions, which could become a single time or ongoing activity. Hence, MP is a cycle that begins with the problem, followed by model formulation, optimization, and generation of optimized solutions. In the next step of this article, we will explain the usefulness of the MP concept in different processes of the oil & gas sector.

Figure 2. Definition of the Mathematical Programming

Hence, MP is all about dealing with equations that are non-deterministic. Also, there can be limitations on all dependent or independent variables and the limitations can have equality/inequality. I will explain it in more depth as we move on to the blog. Since there are ten different possibilities for ten equations, we have to opt for the most optimum out of those ten.

In order to do that, there is an optimization/decision variable which is also known as “Objective Function.” The objective function can be maximized or minimized depending on the requirement. For instance, if I want to optimize the cost of any product, I will reduce its cost. Similarly, if I want to increase profit, I will maximize the profit, which is an objective function here.

Characteristics of equations that represent a model